The Marriage Bill in Uganda

During the month of September, I was working on a report about the Marriage Bill in Uganda, previously known as the Domestic Relations Bill, as well as the Marriage and Divorce Bill. It has a complex and a unique history, hence we at IMAGENU thought it would be beneficial for everyone in the research project to have a single document which clarifies the twists and turns of the Bill. Indeed, this was quite a task, as the Bill in a sense dates all the way back to 1904, when the current Marriage Act in Uganda was formed under British colonial rule (Kafumbe, 2009). Nevertheless, it was a task I took upon happily because of the exceptional insight it would provide me with, to be able to dive into the gender relations and their legal framework in Uganda.

The importance of the Bill stems from the fact that the legal framework around marriage and divorce in its current state is quite contradictory and complex, for a large part because of the considerable legal pluralism in Uganda:  this means that statutory laws are applied alongside the customary, religious and local laws (Doss et al., 2012). Furthermore, the present legal framework is inconsistent with the Constitution of Uganda, and the international obligations and standards Uganda has agreed to follow. The Marriage Bill is still currently pushed forward by human rights and women’s rights advocates and NGOs in Uganda (FIDH, 2012).

The table below exemplifies the obstacles and the opposition met by the Bill and presents the main themes of the discussion about the reception of the Bill (Burgess and Campbell, 2016). 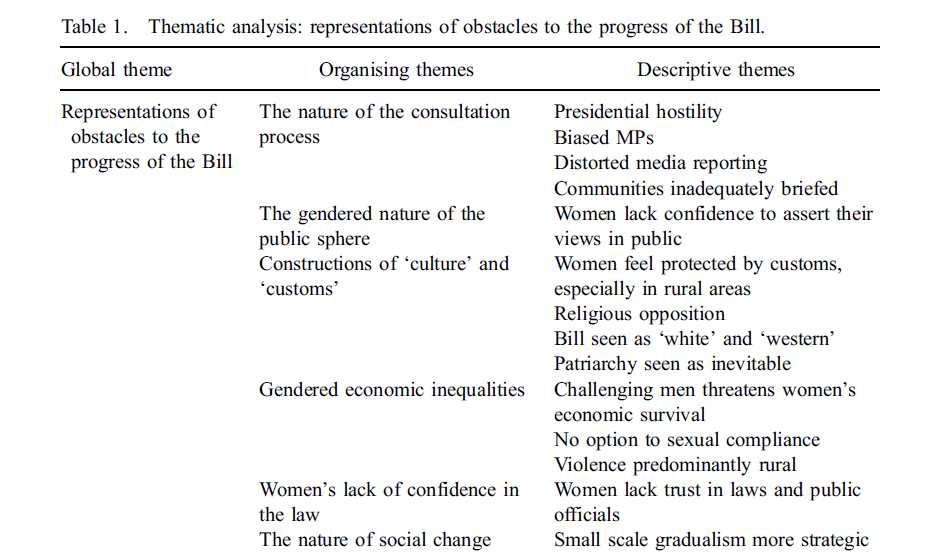 There are also other Bills which are relevant when considering the themes of the Marriage Bill. Some issues related to marriage and relationships have legislation that has been discussed in the parliament, yet issues remain which are not in accordance with the Constitution. For example, under customary laws, a girl of age 16 can marry, whereas the legal age limit for marriage in the Constitution of Uganda is 18 (FIDH, 2012).

The Marriage Bill in itself is currently made up of 28 sections. The Domestic Violence Act which was split from the Domestic Relations Bill (now known as the Marriage Bill) passed in 2009 and received presidential assent in 2010 (Amnesty International, 2010). In the report I place a special focus on four important themes which the Bill covers: What counts as a marriage; Divorce, property and land inheritance; Conjugal rights and Dowry. In each of these sections I begin with the current situation and legal framework, and further explain what the Marriage Bill seeks to reform in that area.

It was extremely educational and interesting to go through the history of the Marriage Bill, which has faced so much opposition in Uganda, also from the side of the women. It is tremendously difficult to create a legal framework for marriage and divorce which would account for everyone’s individual needs, when in reality in Uganda both women and men come from such a variety of socio-economic backgrounds.