Johannes Sløk (1916-2001) founded the Department for the History of Ideas at Aarhus University in 1967, and served as professor at that department until 1974. His intellectual horizon and research interests were wide ranging, but much of his work is dedicated to Kierkegaard, existentialism, absurdity, ancient philosophy, the renaissance, and Christianity. In honour of Sløk’s significance for Danish research in intellectual history, The Annual Johannes Sløk Lecture was inaugurated in 2006.

The honour of giving the Annual Johannes Sløk Lecture is given to an internationally recognized and distinguished researcher, who has made outstanding contributions in history of ideas within an area that, in a broad sense, was or would have been of interest to Johannes Sløk.

DUE TO THE CORONA PANDEMIC THIS YEAR'S SLØK LECTURE IS CANCELLED.

In the era of what Americans call “forever war,” Leo Tolstoy’s lifelong suspicion of making war humane deserves a second look. This lecture reconstructs his views in his fiction and non-fiction and investigates its relevance to contemporary and future forms of war. Today the laws of war call for restraint, requiring protection of captured or wounded soldiers, as well as civilians in harm’s way. Yet Tolstoy, witness to the first international treaty on the subject, was already skeptical that the values of humanity allowed for war, and placed in the mouth of one of his most memorable characters in War and Peace a profound critique of trying to make war humane - one Tolstoy revised the rest of his life. Is it applicable today? 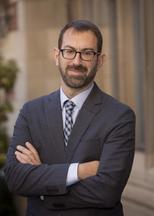 Samuel Moyn is Henry R. Luce Professor of Jurisprudence at Yale Law School and Professor of History at Yale University.

His areas of interest in legal scholarship include international law, human rights, the law of war, and legal thought, in both historical and current perspective. In intellectual history, he has worked on a diverse range of subjects, especially twentieth-century European moral and political theory.

He has written several books in his fields of European intellectual history and human rights history, including The Last Utopia: Human Rights in History (2010), and edited or coedited a number of others. His most recent books are Christian Human Rights (2015, based on Mellon Distinguished Lectures at the University of Pennsylvania in fall 2014) and Not Enough: Human Rights in an Unequal World (2018). He is currently working on a new book on the origins and significance of humane war for Farrar, Straus, and Giroux. Over the years he has written in venues such as Boston Review, the Chronicle of HigherEducation, Dissent, The Nation, The New Republic, the New York Times, and the Wall Street Journal.